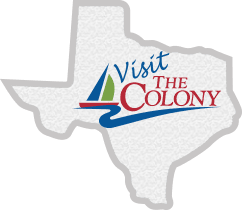 The Colony, City by the Lake, is one of the best-kept secrets in the heart of North Texas. Best known for strikingly beautiful views of Lewisville Lake, The Colony extends 23 miles along its eastern shoreline. Residents and visitors alike immerse themselves in hundreds of acres of wildlife as they enjoy a myriad of recreational opportunities including camping, fishing, swimming, boating, hiking, picnicking and cycling.

While some retreat, many compete at The Tribute, Stewart Peninsula and The Old American, our prestigious golf courses; The Colony Five Star, a state of the art athletic complex; and Blue Sky Sports Center, a 43,000 square foot indoor soccer facility. The Colony's commitment to finding creative and resourceful ways to enhance sports and the quality of life for the entire community was demonstrated when named Number 1 Sportstown for the State of Texas by Sports Illustrated Magazine and the National Parks and Recreation Association. Their efforts are further exemplified by all the sports venues which host local athletic leagues and regional, state and national tournaments. In addition, a full-service marina recently opened at Hidden Cove Park and features slips, rentals and a ship store.

Another family favorite is Hawaiian Falls - a water park that rivals any in North Texas. The Colony also features 28 parks with over 3,000 acres, one of the highest acres of parks per capita in the state. Creative agreements with the city and U.S Army Corps of Engineers led to an award-winning trail system that winds through acres of wildlife management areas along the shoreline of Lewisville Lake.

Incorporated in 1977, the city’s population has steadily grown from 26,531 in 2000 to an estimated 41,000 today. The Colony is located in Denton County, has a land area of 15.7 square miles and is surrounded by Lewisville, Grapevine, Carrollton, Denton, Plano, and Frisco.

The Colony is located in the highly regarded school districts of Lewisville and Little Elm. The Colony is home to six elementary schools, three middle schools, and one high school. Higher education opportunities are available at numerous colleges and universities in North Texas, including the University of North Texas, Southern Methodist University, Texas Women’s University, North Central Texas College, Collin College, and The University of Texas at Dallas.

The Colony offers exceptional quality of life and will be an exciting place for you to visit. The Convention and Visitors Bureau is here to help you plan your trip, find the perfect event venue, discover the best deals and discounts and much more. For more information, contact us via email. Enjoy your visit!